How to craft a world-class, customer-centric strategy to modernize America’s largest transit system

A comprehensive, multi-billion-dollar plan—co-created in just over 6 weeks with input from over 4,200 NYCT employees—calling for a top-to-bottom transformation of a transit system serving 2.4 billion annually

Widespread support for an ambitious plan that clearly outlines why funding is needed and how it will be used, and a new, more agile model for planning and decision-making at NYCT involving input from diverse stakeholders

A state of emergency

Decades of under-investment in infrastructure, worsening gridlock, and relentless use have taken their toll on America’s largest transit system. A series of high-profile incidents through early 2017 exposed an accelerating decline in the condition and reliability of the system, along with increasing dissatisfaction among customers, media, and other stakeholders.

In July 2017, New York Governor Andrew M. Cuomo declared transit in NYC to be in a state of emergency. To address these problems, NYCT knew it needed to make drastic changes across the entire organization. NYCT engaged Bridgeable to help develop a plan to turn around the transit system in New York City in a way that garnered the buy-in necessary to tackle problems affecting over 2.4 billion rides annually.

This plan will be no mere tweak of what we currently do. It is a full-blown NYCT renaissance.

Gaining input from customers and employees

In sharp contrast to the top-down, internally focused strategic planning processes more typical of larger organizations, Bridgeable and MTA New York City Transit applied a design sprint approach. Our objective was to develop a plan in just over six weeks through co-creative stakeholder engagement and rapid prototyping and iteration.

An open consultation process attracted input from over 4,000 NYCT employees. Employees who would not typically interact participated and shared their ideas, while senior leaders whose functions are frequently siloed worked together to prioritize initiatives. Consultation sessions were also held with groups who are often under-represented, such as customers with visible and invisible disabilities, to ensure the plan would be grounded in real customer needs. Fast Forward is about . . . proving to everyone that the MTA is worth investing in, that any of the billions of dollars they might give to the transit agency from here on out won’t be wasted. There is a plan, and it’s a good one. 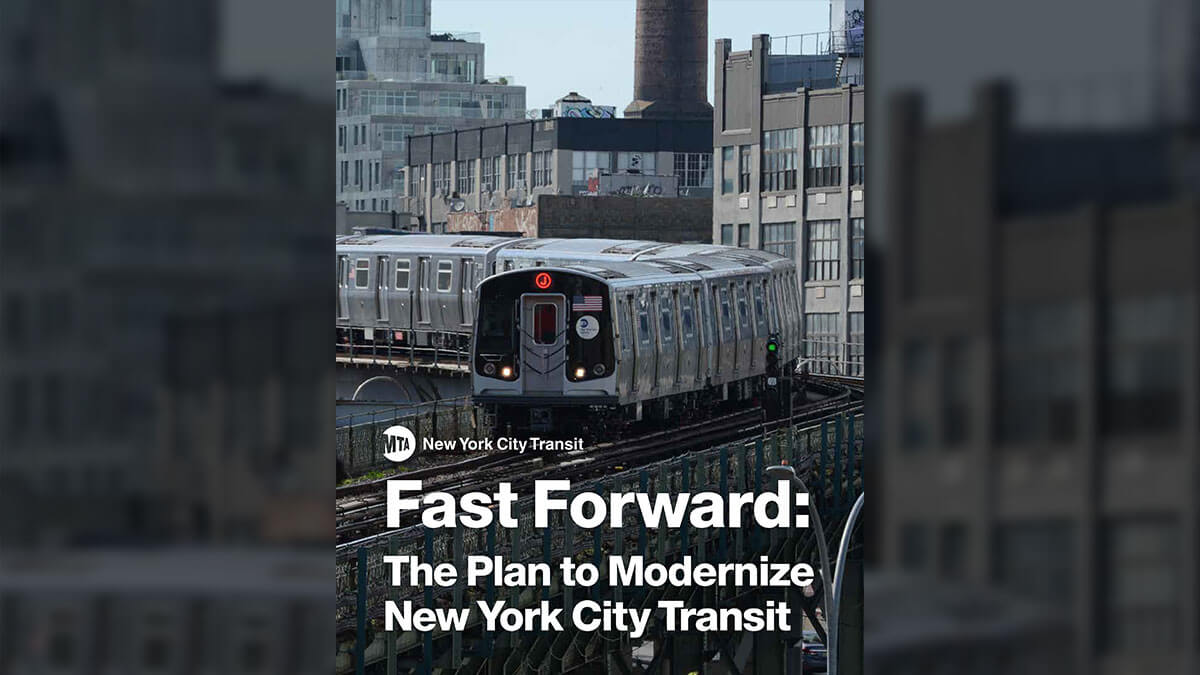 The plan was rapidly iterated at every step to ensure that it both directly addressed stakeholder needs and was executable by NYCT employees. The plan’s structure was repeatedly reinvented, and the final version of the plan went through 29 distinct iterations.

The resulting plan, Fast Forward: The Plan to Modernize New York City Transit, is ambitious—it promises sweeping improvements, including a top-to-bottom modernization of an organization employing 50,000 people, resignaling most of the subway system within ten years, a redesigned bus network encompassing all five boroughs, radically accelerating the pace of accessibility improvements, launching a new open-fare payment system in 2020, and introducing thousands of new subway cars. Goals are underpinned by clear lines of accountability and time-bound commitments.

The plan garnered widespread support, including from Governor Cuomo. It clearly outlined the reasons funding is needed and how it will be used.

Iterations
of the plan:

Heralding a new way of working

The planning process heralded a new way of working for NYCT by modeling the agile approach the organization needs to embrace in order to deliver its ambitious plan.

The six-week sprint also showed the value of co-creating with employees and customer representatives with the “Engage & Empower Employees” section of the plan including a range of ideas generated by employees, including those that reduce bureaucratic hurdles, while the “Accelerate Accessibility” section was co-created with input directly from accessibility advocates and people with visible and invisible disabilities. The resulting plan goes beyond lip service and lays the groundwork for success.

Work with us to solve your most challenging on-the-ground problems.