As designers, we have more stakeholders, fewer resources and more demanding publics to contend with.

We’re no longer concerned with only solving discrete or isolated problems, where the end solution can be predicted. In this new era of service design, tools are secondary to the problems that need solving.

At SDGC15, we hosted a workshop that sought to explore this idea. The session began with a provocative statement: tools alone aren’t the answer. We asked participants to put problems first and tools second, tasked them with breaking the tools they were most comfortable with (namely the service blueprint) and asked them to create a hybrid tool that could be used to address a meaty systemic service challenge.

What follows is an overview of the workshop, including some of the thinking used to structure the session.

Seeing the big picture: from touchpoints to service systems

In the early days, re-designing touchpoints made up the bulk of service design projects, as we’re accustomed to making artefacts or because our clients wanted to see immediate results. The tools we used reflected this, tracing simple journeys through one or two touchpoints. What we’ve learned since, though, is that well-designed touchpoints alone are not sufficient. For example, an organisation may have done a great job ensuring their website gives prospective clients the information they need to make an informed purchasing decision but, if the service agreement they are asked to sign is convoluted and difficult to understand, all of that work at the touchpoint level is wasted.

The work of service designers today is largely concerned with organisational transformation: optimising internal processes, policies and structures to ensure that the back-of-house and front-of-house are aligned to the needs of people using services. In this regard, service designers are venturing into the area of organisational planning and design, the traditional domain of management consultants. This work requires more complex tools reflecting journeys across many touchpoints and touching on the fiefdoms of a diversity of stakeholders (e.g., Finance, HR, and IT): service blueprints or touchpoint maps are great examples of these kinds of tools. 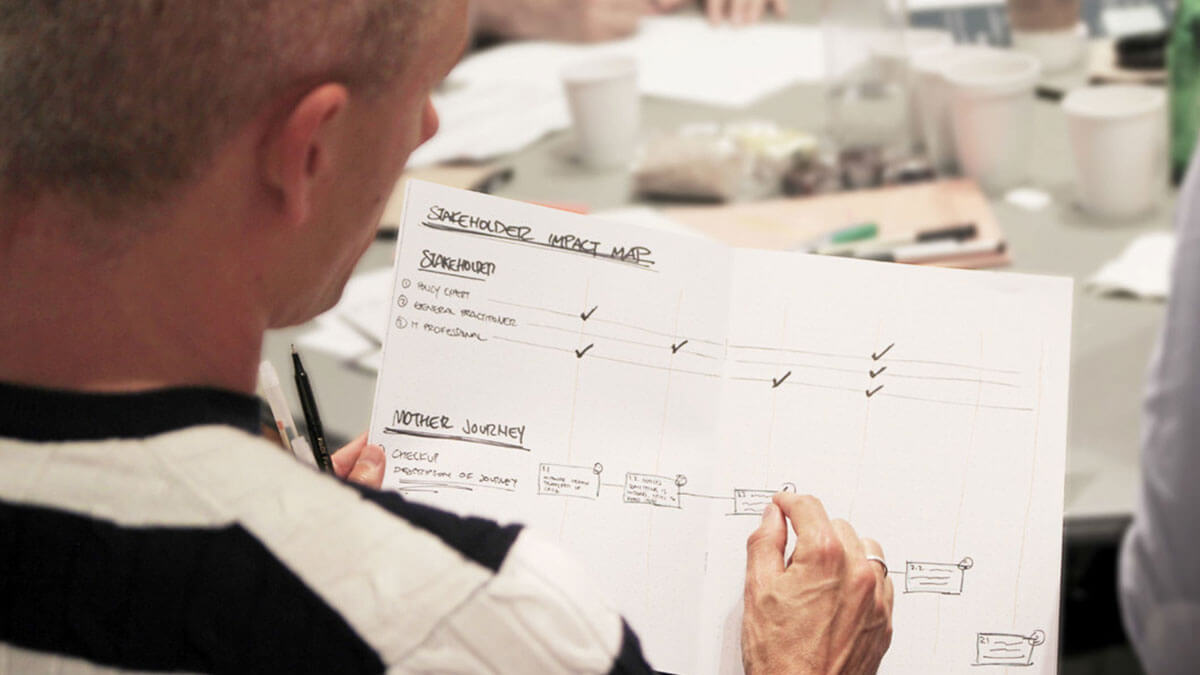 Looking at our most leading-edge projects, we’re starting to see what’s next. Design has evolved, from a practice oriented towards the solving of discrete problems, to a mindset for thinking through complex organisational arrangements: from nodes to networks. Now, we see our work increasingly oriented towards constellations of services and intricate assemblages of actors (e.g., competitors, manufacturers, regulators, government organisations, lobby groups, etc.). At this level, successful service delivery requires coordination between organisations that, in themselves, have their own organisational arrangements to contend with. Service design can be used to bring these organisations into closer alignment: sharing resources, coordinating regulatory reviews, ensuring legislation is of mutual benefit and accounting for the life-cycle costs of production. We envision contexts in which the interests of different groups are held in balance: each organisation, to some degree, is dependent on the success of others.

Take, for instance, a typical telecommunications company: customers don’t meaningfully differentiate between who manufactures their cell phone, who ships it, who regulates the industry and who ultimately provides the voice and data service they’re accessing. Instead, they see it as a bundle of cohesive and deeply interdependent elements that can make or break their experience as customers. As service designers, it’s our job to build alliances between these competing interests, breaking apart the tools of the past to address the challenges of the present.

In addressing these more complex problems, we’re working towards the development of toolkits rather than tools: collections of components that can be recombined and hybridised into bespoke tools that address the particular climate in which a given intervention needs to flourish. This approach requires the borrowing of bits and pieces from a variety of established tools.

For instance, combining multiple experience maps within a single blueprint, overlaid with current and future organisational initiatives. This conscious approach of carefully selecting components in response to the needs of the system is paired with a problem-finding practice oriented around co-creation. These hybridised toolkits are used to facilitate dialogue between participants in structured design workshops. In contrast to traditional service design tools, largely used to communicate information in the form of static artefacts, this hybridised approach encourages participants to present conflicting points of view. The tools become a space where stakeholders collect, sort, and synthesise knowledge, working through problems together. 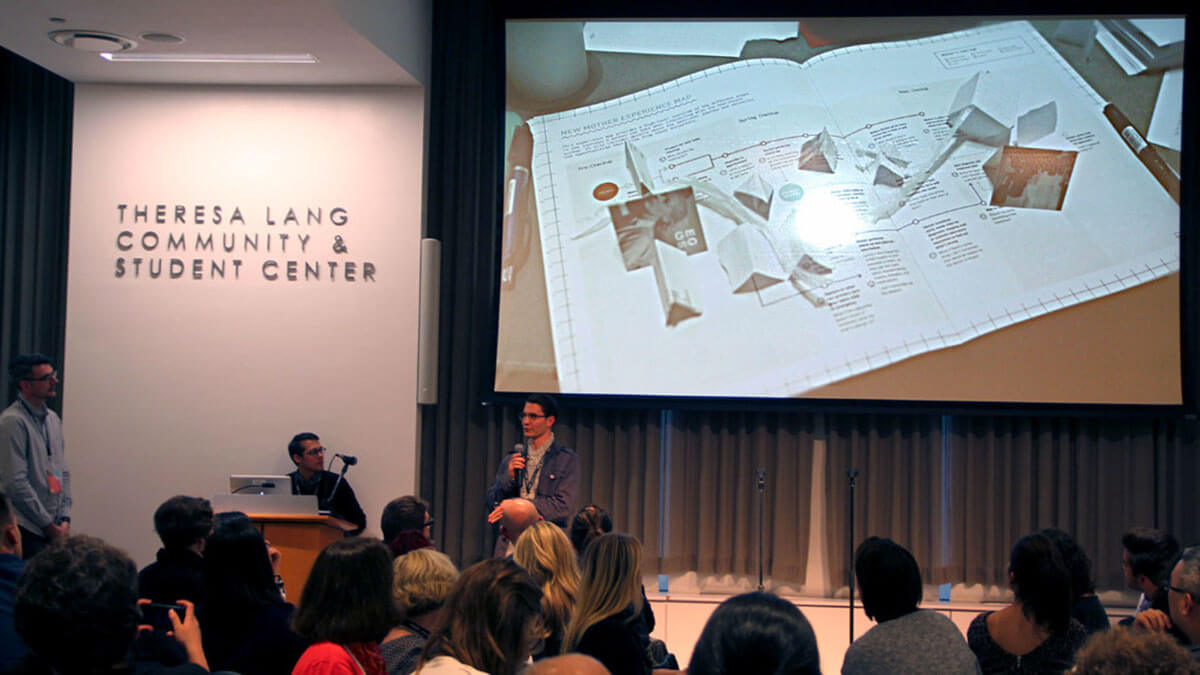 To give workshop participants a taste of what this new approach might look like, we asked them to co-create a hybrid service design tool that could be used to collect information at a large multi-stakeholder workshop. Participants were asked to imagine a scenario in which they had just joined a design team tasked with implementing a new service that would give parents access to their child’s Electronic Medical Records (EMR). The service would enable parents to keep track of data, such as a child’s growth milestones and immunisations.

In this scenario, the government agency responsible for overseeing the project assembled stakeholders from the private and public sectors to examine the systemic implications of launching the service, namely to mitigate any disruptions in existing healthcare delivery. Teams were given 15 minutes to break apart a set of partially complete service design artefacts and build their own hybrid tool, with instructions, that could be used to facilitate and collect data in a multi-stakeholder workshop.The challenge was messy and difficult. As expected, groups struggled at the beginning to make sense of all the existing data and artefacts that were given to them. Slowly, though, they began to break these pieces down, prioritising the information most relevant to the group of fictitious workshop participants.

They also began to identify gaps in the information. For many, these unknowns became the jumping-off point for the structure of their hybrid tool. One group, for instance, developed a ‘Stakeholder Impact Map’, a canvas used to identify competing or complementary areas of concern related to the project. The hybrid tool became a more neutral space where participants could project their disagreement and dissent without offending other stakeholders. Looking at the canvas from afar provided a necessary framework to assess where areas of mutual benefit might exist.

“A great exploration of the different tools required for complex service problems compared to more tame ones.” — Workshop participant

Perhaps the most ambitious prototype presented was titled ‘Service Tube’. The creators proposed building a physical space (3D) wherein workshop participants could travel down a series of corridors that would prompt them to think through complex questions related to the challenge. The physicality of this approach is particularly unique in that it draws upon the embodied knowledge of stakeholders as they encounter various provocations within the space.The hybrid tools proposed by each group highlight the importance of the sociocultural contexts in which they will be used. We know that design is political. This is even truer as we take on more complex problems.

In taking part in the workshop, participants were exposed to the possibility that their work operates beyond the walls of a specific organisation, and has an effect within a broader constellation: interlocking networks of people, processes, artefacts that are relationally tied to one another. Our work as designers sits at this nexus: between systems. We make connections and forge alliances between competing interests. The tools needed for this work must be as fluid as the challenges that are upon us. We must think beyond static artefacts, predictable problems and closed systems to embrace the hybrid and contingent nature of services today.

Chris is passionate about supporting the Bridgeable team and clients in bridging the gap between consumer insights and business impact.